Vanessa shares what Michael Putz passed onto while training her at home in Taranaki, NZ

Once again I feel that I have been saved by my German friend and mentor, Michael Putz. Back to the safety net of good solid basics! However, as stated so perfectly and frequently by the master himself, “Good is never good enough!”

We have worked together for the last 5 years, courtesy of Dressage New Zealand. However, Michael made this, his tenth trip back to New Zealand, as a special favour to help me and a small group of other riders dedicated to his training philosophy. And his timing could not have been better, with his English vocabulary perfected due to the release in this language of his popular German book “Riding with Understanding and Feeling”.

Unlike many trainers, Michael insisted that all riders start the warm-up under his scrutiny, with that starting with the walk. Right from the beginning the horse was encouraged to remain active, with the rider maintaining an elastic contact following the natural nod of movement. Exercises performed at the walk included leg yielding to and from the 3/4 line, then constantly changing the frame to encourage the horse to swing through from behind while remaining confident to the hand at all times. Playing with forward sideways exercises early on in the program encouraged the horse to stay active not only in his body, but also in his mind.

This concept was followed through to the trot and canter work. However, more attention was paid to the use of half halts to encourage the horse to remain in self balance right from the beginning. Quick, determined half halts were followed immediately by a forward following hand. “Half halt as if you want to stop, and then go ahead.” Never were the riders to hang in the horse’s mouth, or fall backwards behind the movement.

If in such an instant an incorrect half halt had been accidently applied, Michael would clasp his hands while sighing “Poor Horse!”

It was vital in the half-halts that the horse remains through from behind, without ever shortening the neck. Because the horse’s neck is his balancing pole, the larger horses especially were encouraged to remain with a positive pull and a long neck throughout all the work.

If the horse resisted the hand and became hollow and above the bit, riders were instructed to carry the hand, therefore positioning a straight line from hand to the bit.”A high hand will bring the neck low, and a half halt with a low hand will push the neck up.” Especially during the trot/canter transitions, riders where encouraged to carry up their hands, to keep the horses through the bit with a rounded top line.

When dealing with the contact and straightness of the horse and rider, many riders (especially on the left rein) were encouraged to carry their left hand to keep the hands level. It became very clear to see that the majority of right handed riders drooped their left side. I was very pleased not to be alone with my droopy left side!

To improve the half pass, the traverse had to ridden with plenty of bend, while maintaining an even four tracks, with many repeats between traveres and voltes, followed by leg yields into half pass. For example: leg yield to left, half pass to the right, then leg yield again.

It was amazing how truly collected the canter work became, solely due to the exercises involved. All

the canter work was kept active, and collection was progressive, so that the horse remained through from behind. By gradually progressing the circle size inwards, then turning the forehand, the advanced horses were able to perform quality working pirouettes, while maintaining a truly collected canter with a true three beat.

Throughout the training sessions the horses were refreshed in the walk. However, even here extreme attention to actively keeping the horse on the aids was encouraged. “Your horse has twenty-three hours to rest, so keep him active and attentive while walking!”

It was interesting to observe that all the horses and riders, even with the most demanding of exercises, were encouraged to remain loose and relaxed. Riders had to frequently shake and loosen their arms and shoulders to stop any tension sneaking in. Personally, the moment I relaxed, loosened my body, and began to breathe slowly, the improvement to my one time sequence changes and passage was amazing, but also effortless.

Michael loved the horses’ being fresh, and any playfulness was encouraged, along with the feeding of NZ Oats. “You have the most wonderful oats here, and horses LOVE Oats!”

However, as unlikely as it may be to have rain in “Taranaki” we did experience such a phenomenon. It was during this rare event that Michael made riders even more aware of how ground conditions must be taken into perspective when performing different exercises. Heavy and deeper surfaces would place far more demands on the workload. Also to be considered when performing extensions and flying changes was the slope of your arena, with the emphasis being to ride such exercises “Uphill”, not only in text but also in terrain! Luckily, only Heelane Tompkins had a torrential downpour, and being an expert with water obstacles, she tackled the surfaces with careful precision and skill.

As always in good horsemanship, never were the horses drilled, and all riders were encouraged to hack their horses for mental and muscle recovery. So it was this requirement that provided the opportunity to flee the arena, and head to our local Oakura beach for a little recreation. This happened to be Michael’s first horse ride along a beach. As we turned towards home my horse and Michael’s mount, Arvan, decided to test Michael’s seat with a not so little capriole, much to my horror and Michaels amusement. “This is good, He is fresh on the beach, Aye!”

I hope you have all enjoyed and benefited from reading about the training, as much as we all did learning from such a genuine master and lover of equines! Thank you Michael! Oh, and by the way, Michael did survive his beach ride! He even claims he will repeat it on his next New Zealand visit! 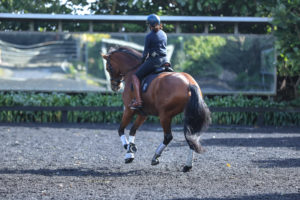 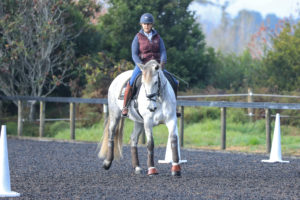 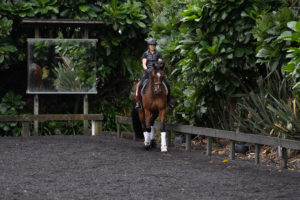 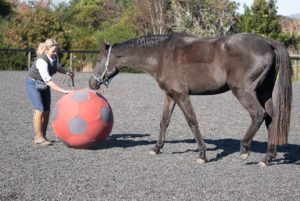 How To Ride Walk Pirouettes 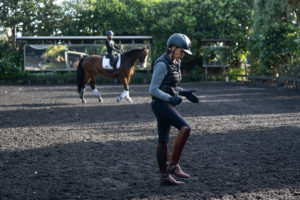 How To Get Your Horse In Front Of Your Leg 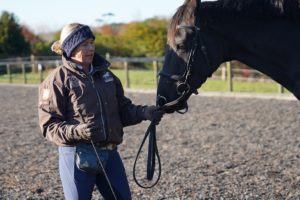